Music and ethics under review

Does music nowadays reflect laid-back broadcasting regulations that may result in ethical values of young people being compromised? Do minors deserve protection against inappropriate music content? Obviously, there must be a connection between music and ethics given the current audiovisual protection schemes, so why is music not regulated under a general age rating system? Ethics research on the music industry is therefore needed given the significant amount of content being air-played under no age rating system in countries like Spain where music in a foreign language does not comply with age protection slots. The aim of this study is to analyse the connection between the lack of music regulations and possible impact on the values of young people.

As to measure different variables, a questionnaire based on the Likert scale was conducted amongst 32 students aged 18-22 from two professional training educational centres. The method to analyse and classify results was the structural equation modeling (SEM-PLS) which revealed the strong connection with the variables.

Few are the studies focusing on the level of understanding and impact of explicit English music on young people considering the lack of age-rating systems and protected slots for profane English music being air-played in popular Spanish radio stations. Unfortunatly, ethical values are hopelessly to be compromised, even in a foreign language, therefore, possible impact on established values needs to be considered.

Among many others influencers, singers, song writers, producers or record labels currently use profanity in song lyrics making use of the freedom of speech statement to show and promote a different array of values they feel consistent with the surrounding world. Bearing in mind the power of music and communication means, it becomes a hard task to find common ground to comply with different legal frameworks that protect minors from controversial content.

From a regulatory point of view and despite the fact that the audiovisual sector is backed up by a structured legal framework in order to safeguard the protection of minors from objectionable content, the lack of a private regulatory body for traditional radio broadcasting reveals a loop in the system that requires to be addressed. Currently, Spanish Law 7/2010, of March 31, on General Audiovisual Communication, mainly focusing on TV programs, films and video games actually provides an age rating system, however music content is left aside with the risk of compromising ethical values of young individuals and their social behaviour.

Given the wide range of music genres in the market, it is almost inevitable to experience influences from different musical varieties and somehow adopt profanity as one of the most representative characteristics that is commonly used to express feelings and emotions regardless of audiovisual regulations and protection time slots. 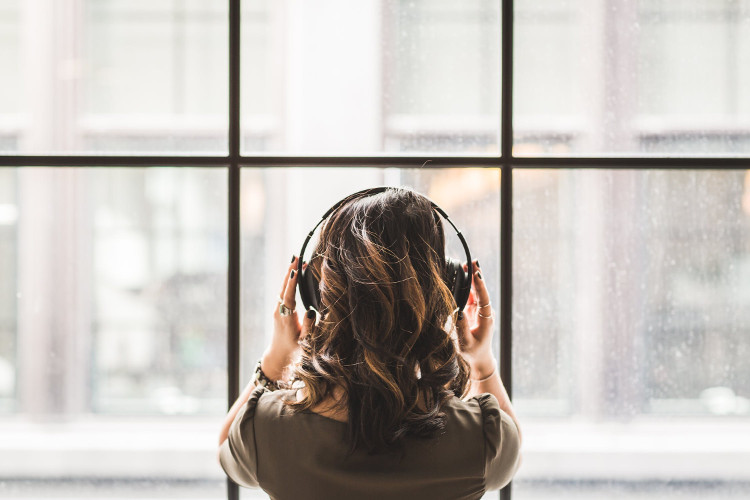 Young people are generally immersed in a merely technological world with endless music options; however, these follow a conflicting legal framework, especially with songs in a foreign language, therefore the inconsistency of the applied law for these cases is thus served. Although in many cases, a clean version of the song in question is available, it is the explicit version that is mostly broadcasted, creating parental debate. The fact that profanity has even reached soft pop songs indicates a laid-back socially accepted perception of strong language and a change in ethical values.

Focusing on one of main regulations that affect Spanish radio broadcasting, Law 7/2010, of March 31, on General Audiovisual Communication, art.7, it establishes the obligations of audiovisual communication service providers in regards to minors to protect them from certain content, however no special attention is paid to radio broadcasting or foreign languages being air-played in protected slots.

On the other hand, music being a top constant activity in the life of a young person should conform with the same legal audiovisual path, therefore ethics research is much needed to tackle a global issue that affects both parents and children.

Endless are the examples of profanity in music regardless of the genre. Practical examples are best to show the ongoing increase of feelings of anger or resent, to mention but a few. 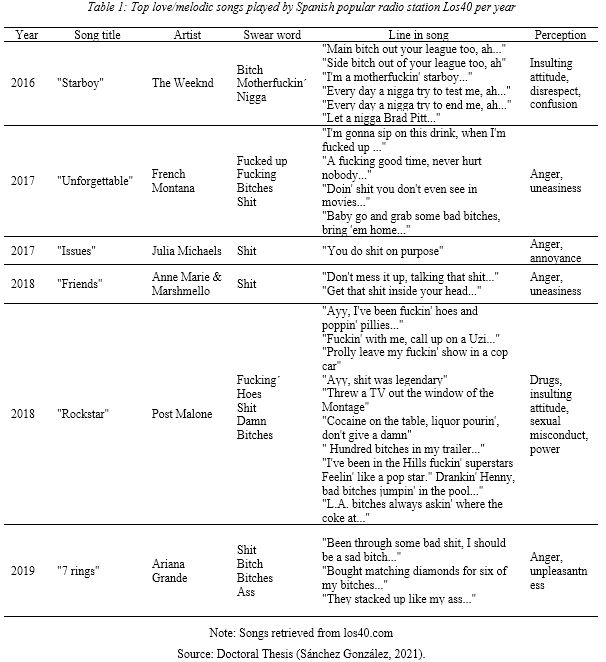 In countries such as the United Kingdom, and until very recently, some songs have been banned for political reasons, references to abortion, religion, sexual innuendos, ambiguity, etc. Some examples include:

Nevertheless, there are songs reflecting values today, although, if compared to values a few decades ago, the difference is considerable. Society changes and so does language and values. 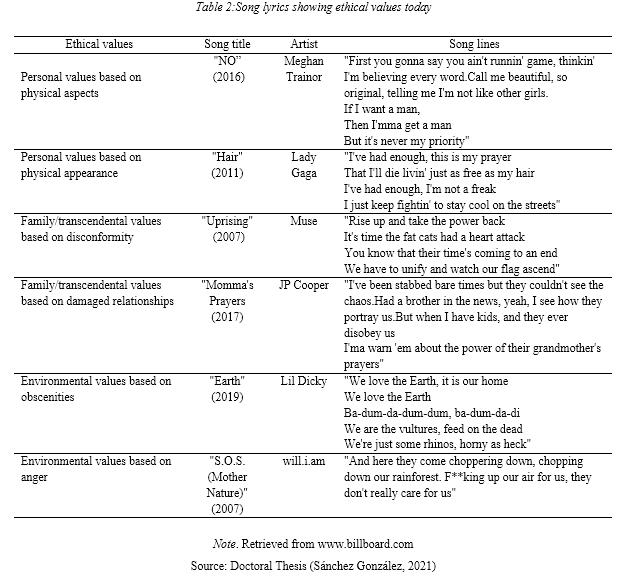 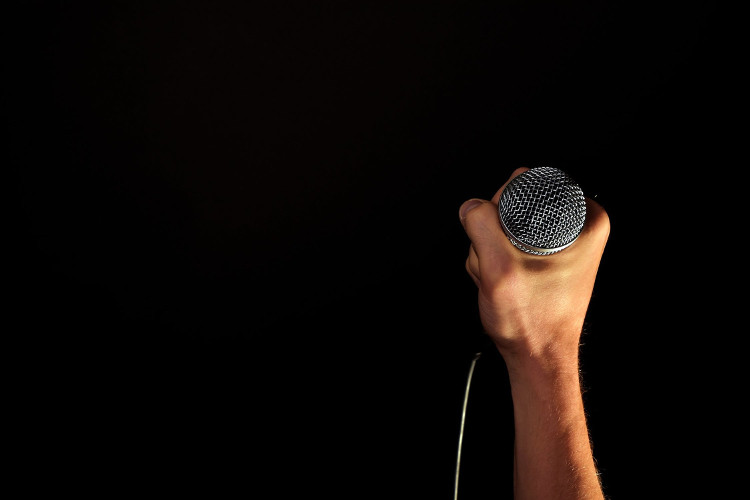 There is a considerable amount of literature that focuses on the impact of music on behaviour in young people, considering music as one of the main recreational activities in the different developmental stages and an influential factor to consider regarding social trends that may lead to a change in ethical values guiding life choices and behaviour in different ways (MacDonald et al., 2012). There has been a relevant change in song lyrics over the past few years moving towards feelings of anger or sadness (Lawrence Technological University, 2019) among others, reflecting changes in social values today (Napier & Shamir, 2018), which at the same time is being affected by worldwide communication, interactions and relationships of all sorts making taboo words destined to disappear (Kaye & Sapolsky, 2009). 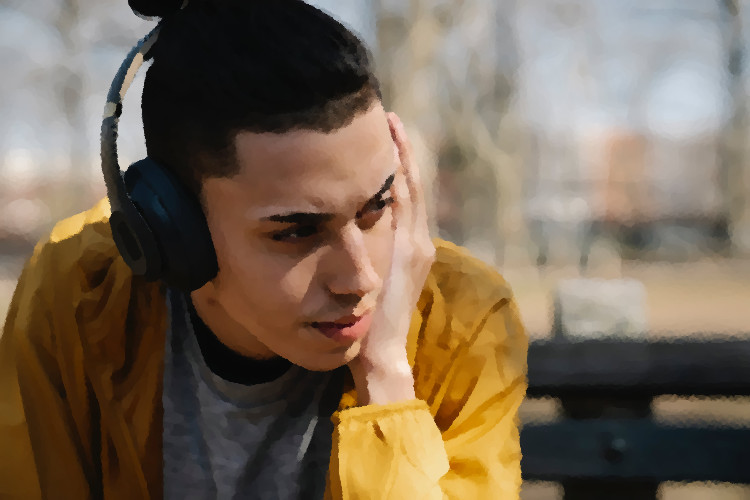 Furthermore, any music experience may affect personality and behaviour, as claimed by Hargreaves and North (1997:1); personality characteristics can be influenced both by past and current strengths and experiences and the interactions of both (Allport, 1961). In addition,  Bussey and Bandura (1999) claimed that the perception of roles and beliefs could be influenced by media messages, in the sense that should the music industry promote the use of profanity, then young followers may adopt the messages promoted in the profane lyrics mirroring violence, sex or drugs (Hall et al., 2012) and follow similar social behaviour, embracing it as own.

Nevertheless, the way individuals behave not only depends on adopted values but also on how relevant the situation becomes for them. Values, consequently affect norms (Schwartz & Clausen, 1970) in social environments and so do attitudes in personal environments, subsequently guiding human actions.

Music has always played a relevant role in the ethical training of young people due to its many contributions to human emotions, able to change perspectives, attitudes or behaviour to then be reflected in own personal ranking of values. Nevertheless, it is imperative to bear in mind that minors have the right to be protected from inappropriate content that may affect their moral, psychological and physical development and regulatory bodies have been created for that purpose, nonetheless, it is mainly parents and tutors that are in charge of supervising the content their children view, adopting the role of models and monitors (Hogan, 2001) for them.

There is actually enough evidence that consolidates past research on the effects of music in young listeners verifying changes in music lyrics and impact on values and social behavior. As previous studies regarding the context of young people, values play a key role in their current education process (Saarikallio, 2011; Rentfrow et al., 2011).

From a regulatory point of view, ethics regulation policies in Spain need to be researched on and assessed regarding music broadcasting and provide options such as family settings that can make radio broadcasting safer for children and be equally regulated if compared with other audiovisual content such as films or video games.

Considering the information above, four hypotheses can be brought to light. Details are to be found in the model (see Figure 1). 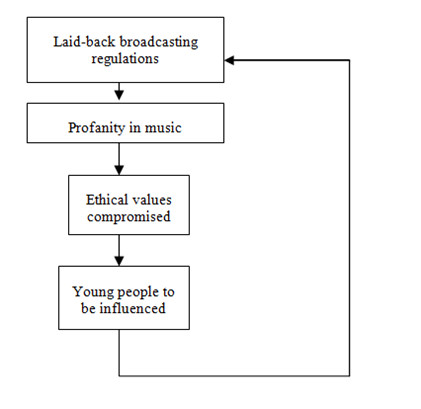 Considering how fast society changes, and with it, ways of life, ways of understanding and adapting to new paradigms, awareness needs to be claimed about the impact on human behaviour, especially in younger generations, as music raises emotions and emotions affect values and ethical behaviour. 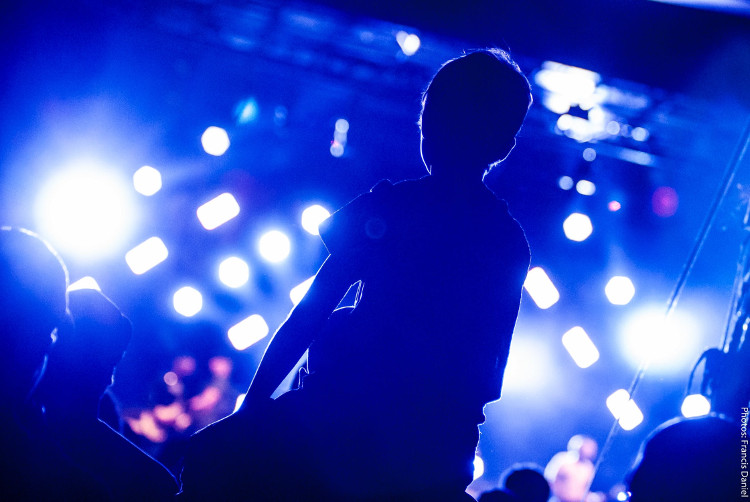 In order to meet the aim of the study, the quantitative method by means of a questionnaire was employed and was deemed the most suitable option as it is a social science study. The SmartPLS programme (Ringle et al., 2015) was used with the SEM-PLS (structural equation model-partial least squares) multivariate technique as to study and relate the latent variables. 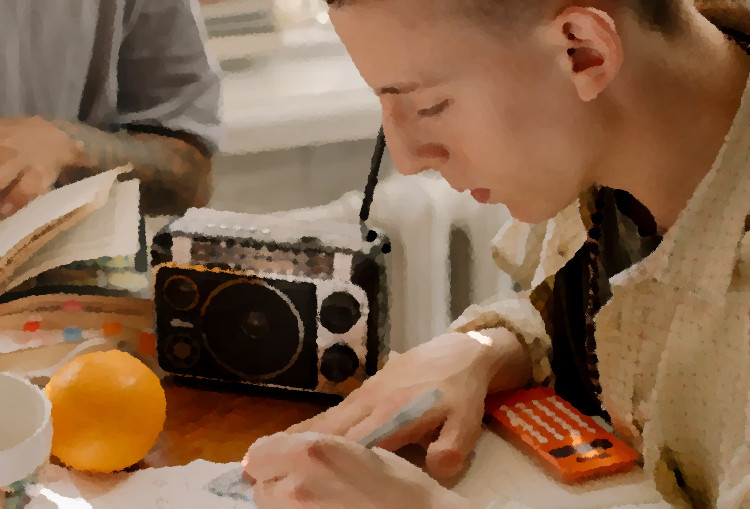 The design of the constructs aimed at defining the items for the questionnaire considering literature concepts previously mentioned.

A questionnaire based on the Likert-scale rating systems was used with four items related to current music regulations, profanity in music, values in young people and possible impact on their personality and behaviour.

Google forms was the method chosen to draft the items and once a link was obtained, it was sent to professional training students. Before, a draft of the questionnaire was tested with five random students to make sure the questions were properly formulated, understood and the suitability of the questionnaire.

A total of 32 (n=32) participants studying different branches of dentistry from two vocational training centres in Extremadura and ages ranging from 18-22 volunteered after offering research credit for their participation. Confidentiality was guaranteed at all times. They duly responded to the questionnaire by clicking on the link provided for that purpose.

The measure proposed by Fornell and Larcker (1981) shows the variance obtained by a construct from its indicator in regards to the variance. The values ​​of the composite reliability should stay above the recommended limits of 0.7 to be relevant, which met the results of the study. The four variables detailed revealed an AVE with values that range from 0.599 to 0.610 confirming the appropriateness of the convergent validity in the model. The confidence intervals were 2.5% and 97.5% showing the strong relationships in variance in the constructs of the study.

The combination of emotions raised by music lyrics can engage with other realities, therefore the variables and hypotheses of this study can actually predict the model stated. The variables are strongly connected forming a vicious circle.

The research questions being: Does music nowadays reflect laid-back broadcasting regulations that may result in ethical values of young people being compromised? The analysis of the variables and results provided a positive answer. 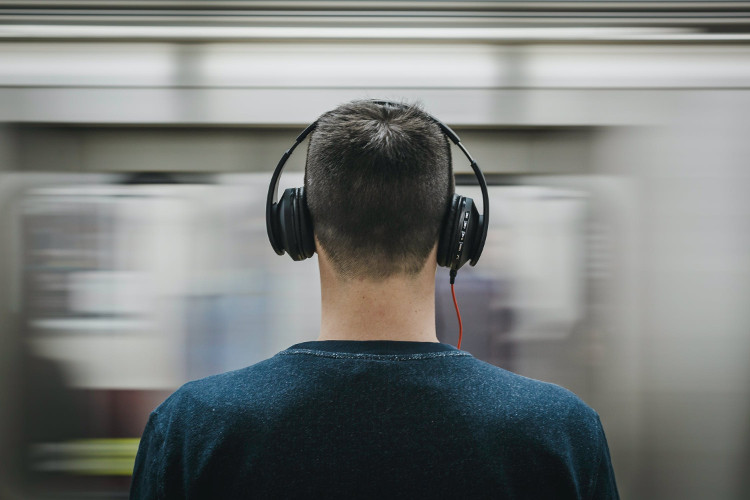 Today, is immersed in a musical globalization process where “everything goes”. Results have revealed that music in English is quite popular among young people and that can play an important role in their education and ethical values, consequently leading to change in behaviour. Considering all the statements previously mentioned, four main conclusions can be drawn from the study.

First, responses enabled to quantify social change in the sense that only a few students realised the lack of regulation in music in a foreign language, showing adaptation and acceptance.

Second, Profanity in Music (ME) can be deemed a determining factor in the education of young people, as music comes with cultural baggage.

Third, Ethical values are compromised from the listening of profane music as music shows ways of life that are standard nowadays, however that aspect does not necessarily relate to values learnt within the family nucleus or at school. 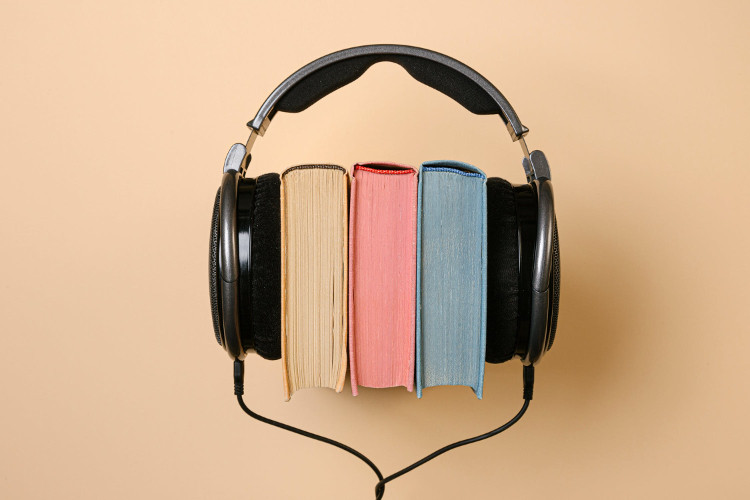 Fourth, the combination of emotions through music lyrics has an impact on young people.

As for theoretical implications, this study corroborates previous research on the field of profanity in Music. On the other hand, awareness is the main practical implication as it provides evidence of a problem that is difficult to tackle.

The sample size was considered a limiting condition; however, this study can be easily replicated in similar scenarios.

Further research on the impact of profane music in a foreign on ethical values of young people is recommended as it could add to literature in many a branch related to human learning and behaviour.